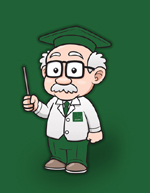 Hair Hygrometer
The dimension of natural and synthetic materials change in response to changes in humidity. The human-hair hygrometer utilizes a bundle of hairs, held under tension in a mechanical arrangement. Expansion and contraction of the bundle due to changes in humidity and temperature are transmitted through a linkage to a dial pointer or recording mechanism. A readout is provided in terms of relative humidity. This method dominated humidity measurement from the late 18th to the late 20th century.

Wet-and-dry bulb psychrometer
Dating from the 19th century, this is a low-cost method of determining atmospheric humidity. The instrument depends on the use of two identical thermometers, one of which has a moistened wick surrounding its bulb. The temperature recorded by the “wet bulb” thermometer is depressed, owing to the energy required to evaporate water from the wick. The degree of cooling is related to the water vapor pressure in the atmosphere and the enthalpy of evaporation. Relative humidity may be determined from readings of the two thermometers by referring to psychrometric charts. There are modern implementations of this principle, which use thermocouples in place of mercury-in-glass thermometers. Instruments which rely on evaporation or a forced draught rather than natural draughts are more accurate.

Electrolytic Hygrometer
Faraday’s law of electrolysis forms the basis of the electrolytic hygrometer. A bifilar platinum winding on a quartz or Teflon tube coated with phosphorous pentoxide provides the measuring cell . The moisture contained in a stream of gas is adsorbed by the hygroscopic phosphorous pentoxide and continuously electrolysed into its constituent hydrogen and oxygen gases.  The electrolysing current supplied is directly proportional to the water electrolysed and is used to display in suitable units.

Capacitive, Resistive and Impedance Hygrometers
In this types of hygrometer, a hygroscopic medium such as a polymer or oxide of aluminium or silicon is sandwiched between two electrically conductive layers, one of  which is permeable to water vapor. Measuring the electrical capacitance, impedance or resistance is the basis of this type and today most industrial hygrometers use this method. The STORK bi-ceramic impedance sensor is the latest development of the type and is particularly suited for measurement in the trace to intermediate humidity ranges.

Chilled Mirror Dewpointmeter
This type depends on finding the dewpoint temperature of a gas by cooling a mirror over which a sample of the gas is flowing.  The basic method depends on a thermoelectric, Peltier effect, heat pump (usually called simply a Peltier) capable of developing large temperature gradients, on which is mounted a thermally conductive mirror. A thermocouple or platinum resistance thermometer is embedded in the mirror. Light from a source is normally reflected into a photoelectric cell. The photocell and heat pump operate in a closed-loop control arrangement in such a way that the power driving the heat pump is controlled by the amount of light arriving at the photocell, which in turn is controlled by the presence of dew or frost on the mirror surface.

The mirror surface is therefore continuously maintained at the dewpoint temperature of the gas. The thermometer measures the mirror temperature, which is the dewpoint. Changes in humidity have an immediate effect on the optical system, and the instrument quickly finds the new dewpoint.

While the above arrangement serves many applications adequately it has a number of limitations.

Firstly, it is rare for a sample gas to be completely clean and over time contamination accumulates on the mirror surface which means physical cleaning is required at intervals.

Secondly, over time the mirror surface becomes scratched and abraided which affects its reflectivity and its performance.

Thirdly, there is the problem of super-cooled water. It is obvious that, at atmospheric pressure, when a mirror in this type of instrument is cooled, above a temperature of 0ºC water is condensed upon its surface. Below 0ºC, however, an element of uncertainty comes into play.  This is because below the normal freezing point of water, the condensed layer on the mirror surface may be ice or it may be super-cooled water. Super-cooled water may be present at temperatures even as low as -48ºC.

In an instrument which uses the chilled mirror principle, it is important therefore that the optical system should detect  the phase of the condensed layer. This fact is dramatically demonstrated by a simple example. At a dewpoint of -48ºC  the water vapor pressure of a gas is 5.0613 Pa when measured over ice and 8.1226 Pa when measured over super-cooled water. This is equivalent to a difference of more than 4 degrees of dewpoint!

Stork's unique split-beam reflex optical system overcomes this difficulty. It's optical system detects which phase is present and compensates for it. Furthermore, the problem of mirror contamination and abrasion is also addressed in STORK chilled mirror instruments by the AZOR - automatic zero optical re-set.

Other Methods
The above methods are the most commonly used in hygrometry. Other methods include:

All of these other methods, however, are used in a very limited number of commercial instruments.