Developed by our own engineering laboratory, the bi-ceramic sensor is used in our DEWCom loop powered dewpoint transmitters and the DEWRanger portable instrument. The STORK bi-ceramic sensor represents a major technological advance in the humidity measurement instruments - moisture meters in air. It employs two specially developed low temperature co-fired ceramics (LTCC), designated by our engineers as K950 and K263, to create a sensor with a very fast response time and high stability.  A layer of the ceramic K950, with a thickness of 10 nanometers, is deposited to create an electrical insulation barrier with a DC resistance in excess of 2 mega-ohms which protects the sensor from short circuit faults. This is co-fired with an ultra thin response layer only 24 nanometers thick of the ceramic K263, which is highly hygroscopic and responds rapidly to changes of water vapor pressure by changes in its impedance. It is the K950 barrier layer which has given our engineers the freedom to reduce the thickness of the response layer to a minimum. It means that that water vapor exchange with the response layer is much faster than with earlier sensors. 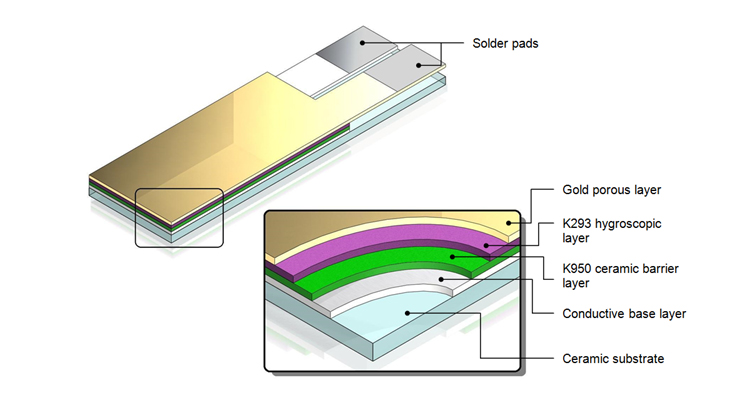